ANTIGONE AT THE ARMORY BY Celia Ipiotis 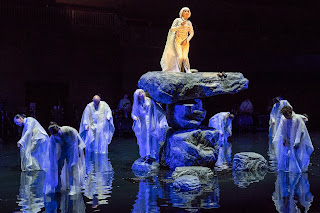 Little is known about the actual specifics of how Ancient Greek dramas unfolded on the amphitheaters of Ancient Greece. But the recent production of Shizuoka Performing Arts Center’s Antigone at the Park Avenue Armory is exhilarating due to its lucidity and quiet authority.

From the river of water flooding the stage, rock formations emerge reminiscent of Stonehenge or Isamu Noguchi’s set designs for Martha Graham’s Greek myth based works.


As the audience settles down in bleachers facing the long strip of stage, a ceremonial procession of performers in white robes and pants enter rubbing glass votives producing high-pitched thin rings.
Positioned at the lip of the stage in the middle of lie of actors, Maki Honda welcomes the audience and offers to brush up the audience’s memories of Sophocles’ famous tragedy Antigone. In a comedic riff, they provide a thumbnail overview of Antigone, exaggerating the central cast members’ characteristics. This funny introduction is reminiscent of the satyr plays that generally followed tragedies as a means of lifting the depressing mood.

Then the actors take their posts and the story begins. Despite women’s lack of rights in ancient times, on many occasions, it’s women who do the “right” thing in the face of moral dilemmas. They are fierce and determined as is Antigone. When her father Oedipus dies (remember, he accidentally married his mother, Jocasta) dies, both his sons engaged in battle for the crown of Thebes and die at each other’s hands. Uncle Creon assumes the reigns and decrees Antigone’s brother Eteocles will be buried with honors, but Polyneices (considered the traitor) will be splayed on the ground as food for the dogs.

This triggers Antigone’s moral crusade to bury her brother despite the king’s orders. In a nutshell she goes against King Creon’s orders, buries her brother and is stuffed in a cave to die. Her younger, more frightened sister Ismene, wails for her sister. When Hameon, Antigone’s fiancée, is unable to change King Creon, his father’s mind, Hameon follows Antigone into the cave.

What makes this particularly thrilling is the way the actors chant out the words and how the light casts shadows (Koji Osaka) suggesting day and night, life and death.

Ancient tragedies were sung because the definition of theater was the unification of text, music and movement. In this rendition, two actors take on each role: one speaks, the other moves.
Caught on top of a boulder, Antigone climbs higher and higher until she can go no further. The competing male voices on either side of the stage declare their lines while the fearless movers run across stones that barely rise above the water. Five men and five women flank their characters serving as the Greek chorus, the community that comments on the tragic action.

Sometimes, rituals rise above theatrical conventions because they conjure a sense of timelessness-- worlds where people battle the forces of good and evil, honor and corruption, morality and fear in a lifelong struggle to reclaim their souls.

Contributing to the “other worldly” yet very real production’s power, a group of musicians stretch across the back of the stage exquisitely performing Hiroko Tanakawa’s percussive composition.
Translated from Sophocles by Shigetake Yaninuma and masterfully directed by Satoshi Miyagi, Antigone interprets social, political and moral dilemmas into a contemporary world weighted by its struggle for survival.
EYE ON THE ARTS, NY – Celia Ipiotis