February 05, 2020
Known for the width and breadth of his rich dance vocabulary, for his sixth NYC Ballet commission Alexei Ratmansky stepped outside the David H. Koch Theater at Lincoln Center, made a right turn down Broadway directly into the lap of the downtown post-modern dance scene. Or perhaps another analogy might be the difference between Tolstoy and Hemingway.

To start, Instead of binding his choreography to a complex, highly orchestrated score by the likes of Shostakovich, Prokofiev, or Leonid Desyatnikov, Ratmansky embraces an sound score by the avant-garde composer Peter Ablinger that super-imposes spoken text over a single piano line. The audio elements are visually projected on the scrim in the form of a recorded signal (looks like a PolyGram in a lie detector test).

Female solos end by linking up to a group of 4 men running across the stage arm-in-arm dressed in glossy colored one piece outfits (by Keso Dekker) that resemble swimsuits of the 1920’s. All exit but one male who peels off to execute a spectacular series of turns, jumps, leaps or leg beats traveling backwards. This bravura exclamation point serves as a humorous bridge between solos and a reminder that these dancers can do it all.

The solos revolve around dissonant combinations that posit space not melody between stretched arabesques with arms up, broken at the wrists looking a bit like a threatening swan suspended in air. Loping gallops allow legs to flare away from the knees, slip in and out of tight little steps, jittery moves or quirky turns only to drop to continue on the floor.

Each ballerina brought her own touch of magic starting with Sara Mearns who can make the most constricted movement spacious; Megan Fairchild’s cheekiness; Georgina Pazcoguin’s passion; Lauren Lovettes’ friskiness; and Unity Phelan’s shadings. In the end, the whole cast swarms the stage -- ballerinas flying into men’s’ arms until they merge to the floor quieting the motion. At this point, the curtain pauses just above the dancers’ heads. Perhaps that’s a sign that movement and sounds continue into infinity?

The rest of the program was filled in with a strong performance of Christopher Wheeldon’s Polyphonia to music by Gyorgy Ligeti; Justin Peck’s romantic Bright to a score by Mark Dancigers and Jerome Robbin’s Opus 19/The Dreamer.

What’s most heartening is to see the theater packed with supportive audience members willing to taste new material instead of another, well-worn story ballet. 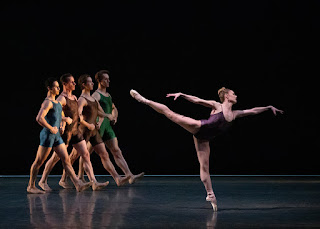