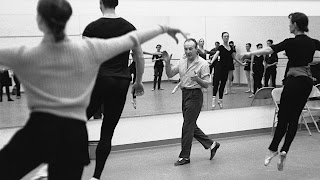 IN BALANCHINE'S CLASSROOM: FilmSeptember 17, 2021In Balanchine's Classroom filmmaker Connie Hochman condenses 100 interviews with current and former NYC Ballet dancers into a portrait of the man they--and so many others--idolized as well as the mystery and science of passing dance from body to another. Inspired by the Americans' outgoing and inquisitive manner, Balanchine took a fresh approach to traditional ballet.

Cutting between seated interviews, in-person coaching and crucial archival material, the film gazes at the man many consider responsible for redefining European ballet into American terms. Unique in the world, the Balanchine dancer shared European and Russian centuries-old ballet traditions streamlined through American rhythms and optimism.

In 1933, when Balanchine arrived in America, Europe was on the verge of WWII before even recuperating from the devastation of WWI. Diaghilev, one of the greatest ballet impresarios was dead, and his renown company, the Ballets Russes, disbanded.

In one questionable section, archival footage of a ballet duet from 1913 includes a voice-over stating Balanchine overturned the staid ballet of his time. However, 1913 happens to be the year Vaslav Nijinsky shocked the dance world with his ground-shattering ballet "The Rite of Spring." Indeed, Balanchine did turn away from the stuffy academy, but his novel ideas were inspired by avant-garde choreographers of the time like Fyodor Lopukhov.

For ballet dancers, a choreographer's interaction with the material is all important. Did he come in with the material set, did he improvise, or ask for movement contributions. According to the interviewees, it was yes to all. Most importantly, if it suited him, Balanchine incorporated "accidents" (a dancer running into a piece late) or unintended gestures into his ballets.

Famously, his daily class was a place of inspiration and bodily assault. When most dance classes might have asked for 8 repetitions of one barre exercise front, side and back; Balanchine went for 64 repetitions at an accelerated speed. Besides speed and musicality, Balanchine took pointe work to a new frontier regarding the foot as a complex, expressive organism capable of micro articulations. Less a teacher and more a movement explorer, Balanchine embraced the classroom as an opportunity for experimentation and the development of exercises that could support his vision.

Suki Schorr, Merrill Ashley, Heather Watts, Edward Villella, Gloria Grovin and Jacques d'Amboise (with young children) are seen coaching or teaching dancers in a classroom. All three taskmasters convince the dancers to not only execute the movements but understand why an accent comes at a certain point, or arm drops down in front of one's face. Despite the exactness of the corrections, or inclusion of vivid imagery, everyone agreed that once the master choreographer passed, his ballets changed. Not surprisingly, Balanchine trusted his dancers to dance and "let the dancers put in their own spice," ultimately feeling "ballets belong to the dancer."

A man whose iconic status only grows with each succeeding year, Balanchine was a man of few words, but when he spoke it was oracular "..you (the ballerina) don't need to be right tonight, you have to know what's right."

There are some omissions, most noticeably the absence of Suzanne Farrell, one of Balanchine's most famous muses. Even without her personal testimony, many people enthuse about her ability to intuitively interpret Balanchine's choreographic intent in a way few others could.

Running about 90 minutes, "In Balanchine's Classroom" will delight young ballerinas dreaming of a career and reinforce the Balanchine lore. Dance lovers will appreciate the extensive archival footage and those less involved might wonder why dancers "sacrifice" themselves to such a rigorous and frequently disparaging art form.

With time, much changes, but perhaps in the world of dance Balanchine was right when he opined "I want dancers who need to dance."
EYE ON THE ARTS, NY -- Celia Ipiotis