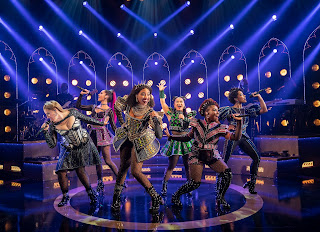 Ready for some high powered singing and nonstop action? Then SIX is for you. Meet 6 glam queens of all time. One after another belts out a pop-styled song demanding who of all the wives was most beautiful, cleverest, sexiest, and deserving of His love. Bits from each queen's bio filters through the solos filling out an existence solely determined by a male's whims.

According to the wives, Henry XVIII owes his celebrity status to them. And from the sound of the cheering audiences, these blazingly talented women are right.

Toby Marlow and Lucy Moss's ebullient musical pits the queens in competition with one another and the one who wins the audience with the most potent sob story takes all the glory!

Despite the wicked lyrics, a woman's lack of agency in the 15th century resounds loud and clear despite the nonstop hilarity. Tautly regal in a futuristic, high-collard 16th century royal gown, Catherine of Aragon (Adrianna Hicks) remained by Henry's side for 23 years. After Catherine, the wives overlap in glorious highs and heady falls.

NYC BALLET: EPISODES February 10, 2020 Historic works rarely revived at NYC Ballet both puzzled and delighted audiences. Last performed in 1993, George Balanchine’s charming Haieff Divertimento (premiered 1947) showcases the company’s new class of ace dancers. In a combination of classical ballet and a jazzy, modern dance vocabulary the ballet features one lead couple, the engaging Unity Phelan and Harrison Ball along with 4 supporting couples. Musically, it flows in a five-part piece that flexes its danceable American music roots—at times referencing Balanchine’s  Square Dance . If  Haieff Divertimento  resembles bubbly wine, then the 1959  Episodes  equals a dry martini—hold the olives. An early experiment meant to bring together two giants of dance world, Balanchine and Martha Graham, Episodes was broken into two parts, separated by one intermission, united through Anton von Webern’s music, and the exchange of a couple of dancers. At the time, Taylor was a member of the
Read more
November 11, 2021

LACKWANNA BLUES Reviewed by Celia Ipiotis                                           Junior Mack, Ruben Santiago-Hudson. Photo by Marc J. Franklin. Lackawana, NY, was one of those towns that lured many hopeful laborers up north only to test their spirits and claim their bodies. That hotspot of mobility and stagnation was home to Santiago Ruben-Hudson. Vivid memories of childhood animated Santiago-Hudson's autobiographical one-man show  Lackawanna Blues  at the Samuel J. Friedman Theater. Positioned on a relatively bare stage with only a stool, couple of chairs, table and the guitarist Junior Mack next to him, Santiago Hudson peppered his conversation with the soulful sound of a harmonica wailing the blues. Read full review.
Read more
November 08, 2021 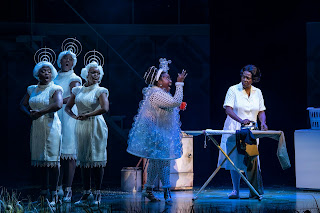 CAROLINE OR CHANGE Review by Celia Ipiotis Nasia Thomas, Harper Miles, Nya, Arica Jackson, Sharon D. Clarke. Photo by Joan Marcus. In this realistic musical written by Tony Kushner (author of Angels in America) with music by the amply talented Jeanine Tesori  Caroline or Change's , dark humor somersaults over whimsical events that turn the radio, washer, dryer, bus and moon into living, singing, dancing people. Astutely directed by Michael Longhurst, the musical plays against a backdrop of women finding their voices, earning degrees and busting into professional careers generally claimed by men. While politicians aim for the moon, the country reels in horror after the assassination of Kennedy and watches as Martin Luther King tries to heal the nation. But all this radiates as mere headlines behind Caroline's dilemma. Read the Review.
Read more