A TOUCH OF THE POET Spotlight Review by Celia Ipiotis 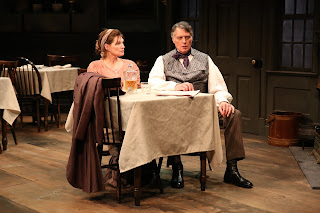 Kate Forbes and Robert Cuccioli in Eugene O'Neil's A Touch Of The Poet. Photo by Carol Rosegg

Frustrated dreams plague the house of the Melody inn and pub. After losing his patrimony, castle and dreams in Ireland, the only thing Cornelius Melody (Robert Cuccioli) retained was his outsized pride in A Touch of the Poet.

On the edge of bankruptcy, his wife Nora (the marvelous Kate Forbes) and her daughter Sara (Belle Aykroyd) work the place, and haggle for credit while he preens.

Self-effacing, kind and generous towards all, Nora can never forget she got pregnant after falling in love with her husband, while working on his family's grounds. The pregnancy forced them to abscond for America.

On the other hand, Sara faces forward towards the future, a place of open opportunity not paralyzed by class distinctions.

When a young man of means falls ill and lands at the inn, Sara becomes his nurse and not surprisingly falls in love with the fella.

This sets up the powder-keg plot pitting the frequently drunk Cornelius against the man's uppity family and recognition of his leavened place in society.

The admirable ensemble confronts a couple of odd transitions, but for the most part, they perform in sync.

Set in a town a few miles from Boston in 1828, "A Touch of the Poet" by Eugene O'Neill and directed by Ciaran O'Reilly runs two hours and forty minutes with one intermission at the always welcoming Irish Repertory Theatre.