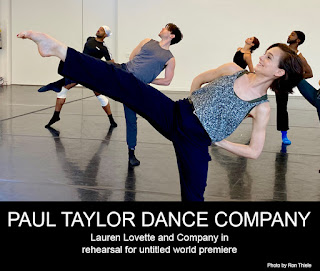 Sandwiched between two major Taylor works, Lovette's Pentimentoto a score by the classical Argentine composer Alberto Ginastera excels in the ease with which the dancers embody the movement. Like Taylor, Lovett dispenses with over-wrought choreography, and instead aspires towards a cleaner palette. In fact, it makes sense to import a NYC Ballet dancer turned choreographer, because Paul Taylor actually appeared as a guest artist with NYC Ballet from 1959-1960.

Although retired from NYCB, Lovett remains an eloquent performer and her embodied experiences translate seamlessly to her interpreters. Effectively locating dancers' comfort zones, Lovett forms highly organic choreography filled with spatial clarity.  In this instance, Lovett imbued herself in the Taylor athletic style -- one that pulls dancers to the ground rather than into the heavens.

Despite this earthy technique, speed remains central--similar to her native Balanchine tongue. In Pentimento a red scarf appears in the arms of a dancer and later it's passed among the 14 performers. Duets filter through the scenes, mixing genders, heights and forms traveling in tandem, lunging and lifting one another.